Home . DevOps . What is Ansible? 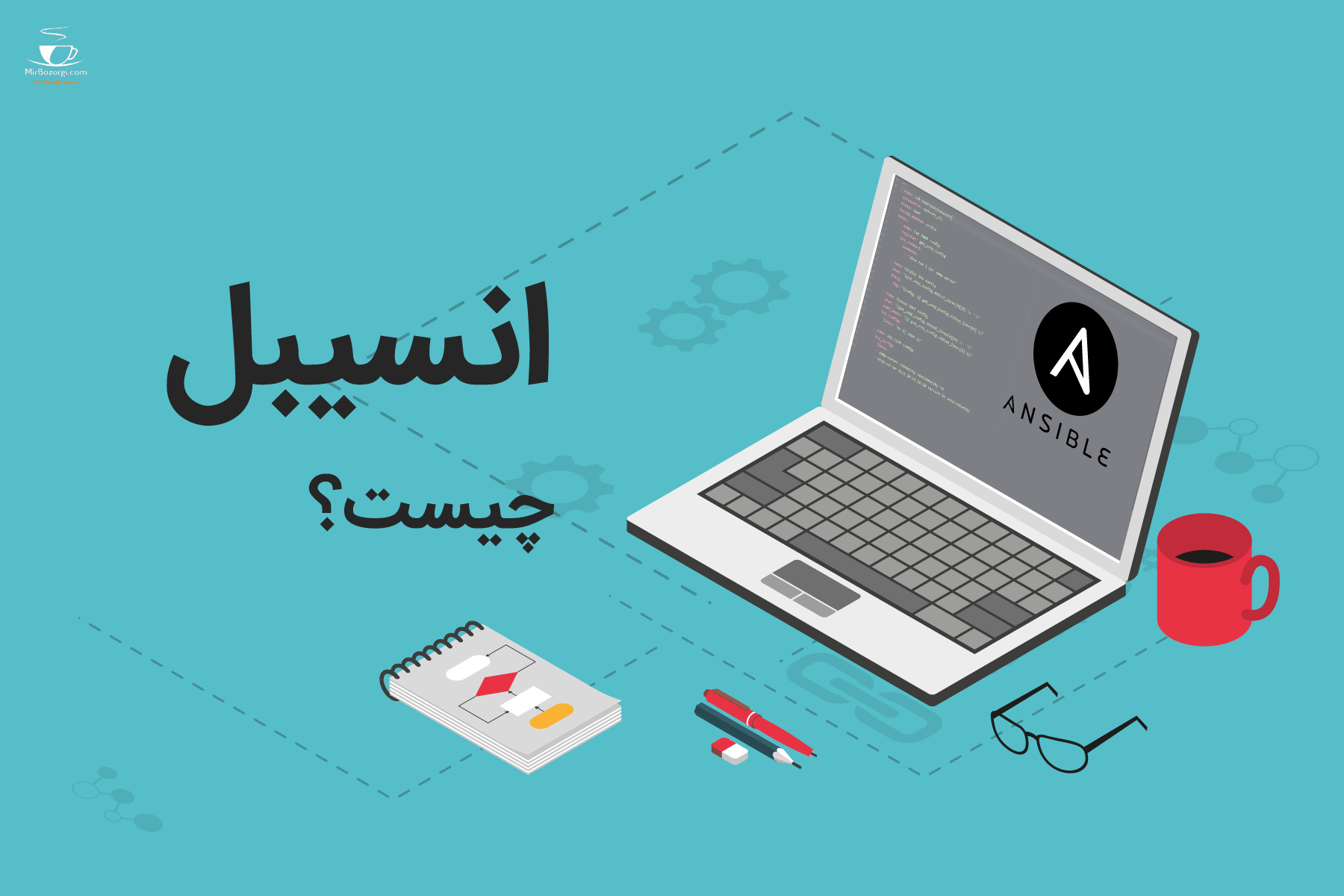 A platform for open source automation, Ansible is incredibly easy to set up, but it’s also extremely effective. Using Ansible, you’ll be able to automate configuration management, application deployment, task automation, and other things. This platform is also able to do IT orchestration, tasks must be run sequentially, and a chain of events must take place on various servers or devices in a series. It’s not hard to see why Ansible is quickly rising to the top of the automation tools that people like to use. Let’s take a brief look at various factors that have contributed to Ansible’s success and popularity among individuals. 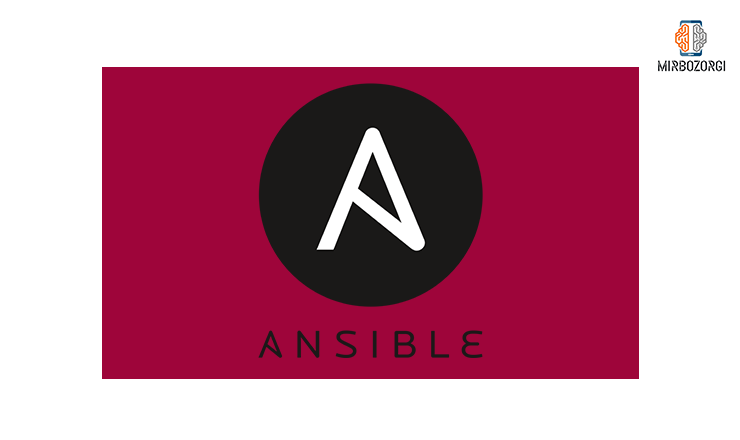 Setup and use are both incredibly simple:  The use of Ansible’s playbooks does not necessitate any coding expertise.

Powerful: Ansible is a powerful IT workflow modeling tool that allows you to model even the most complex workflows.

Flexible: No matter where an application is deployed, you can orchestrate the entire environment. You are also able to alter it to suit what you prefer.

Agentless:  It’s agentless because no additional software or firewall ports are required on the client systems you’re automating. Another benefit is that a separate management structure is not required.

Efficient: Since no additional software is required, your server has more room for application resources.

What can Ansible do?

Configuration management is made simple, reliable, and consistent with Ansible. If you’re already working in IT, you’ll be able to master it quickly. Humans are able to read, and machines can parse Ansible configurations as simple data descriptions of infrastructure, which is a key feature of the platform. All you require to begin system management is just a password or an SSH (Secure Socket Shell, which is a network protocol) key. Configuration management is made simple with Ansible. Using Ansible, you can update all of your machines with the latest version of a piece of software by simply writing IP addresses of the nodes  (also known as remote hosts) and then write an Ansible playbook that installs it on the entire nodes and then running the playbook from your control machine.

Similar to how a musical conductor brings together the notes produced by all of the various instruments to create a cohesive artistic work, orchestration involves bringing various elements into a well-run whole operation. Managing the front-end and back-end services for application deployment, for example, necessitates the management of other things as well like databases, storage, and networks.  In addition, make certain that all of the tasks are completed in the correct order. Orchestrating tasks is made simple with Ansible, thanks to its automated workflows, provisioning, and other features. Because Ansible playbooks are so portable, you can use the same orchestration wherever you need it once you’ve defined your infrastructure with Ansible playbooks.

Team members can effectively manage the entire application life cycle from development to production when using Ansible and Ansible Tower together. Automating your systems doesn’t require writing custom code; instead, you write a playbook outlining the tasks you need to complete, and Ansible will figure out how to get your systems where you want them to be. To put it another way, you won’t have to set up each machine individually. Ansible uses SSH to communicate with remote hosts and execute all commands (tasks) when a playbook is run from the control machine.

The provisioning of your infrastructure must be automated before you can begin automating your applications’ life cycle. You can set up cloud platforms, virtualized hosts, network gadgets, and bare-metal servers with Ansible’s assistance.

Site-wide security policy scanning and remediation can be integrated into other automated processes when you define it in Ansible. And it’ll be utilized in all aspects of the deployment. Meaning that once your control machine has been configured, all other nodes will automatically be embedded with the security details you configured on your control machine. Additionally, no one can access the credentials (admin user ids and passwords) stored within Ansible in plain text. 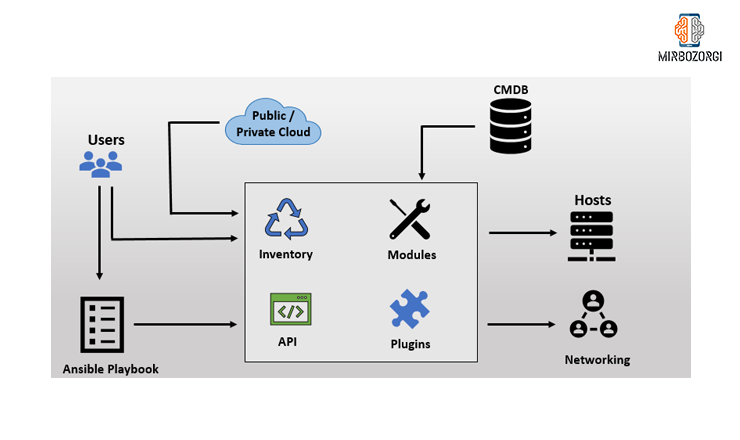 The Ansible automation engine interacts directly with users who write playbooks to run the Ansible Automation engine, as shown in the diagram above. Cloud services and the Configuration Management Database are also involved (CMDB).

Using Ansible, you can create an automation architecture that includes:

Inventories: There are lists of hosts (nodes) that need to be managed in Ansible called inventories. After this, Ansible uses a transport, like Linux, WinRM for a Windows operating system, SSH for UNIX or Networking devices.

Modules: Using playbooks, modules can be executed on remote hosts. Modules can execute system commands or control system resources like services, packages, or files (really anything). This is done by modules, which act on system files, install packages, or use APIs to communicate with the network.

Plugins: Job build steps can now include the execution of Ansible tasks via plugins. Ansible’s core functionality can be extended with plugins. Plugins are easy to write and come pre-installed with Ansible. For instance, Action plugins are considered front ends to our modules and can perform the required commands (tasks) on the controller prior to communicating with the modules. In order to avoid costly fact-gathering operations, cache plugins that keep a cache of ‘facts’ are used. 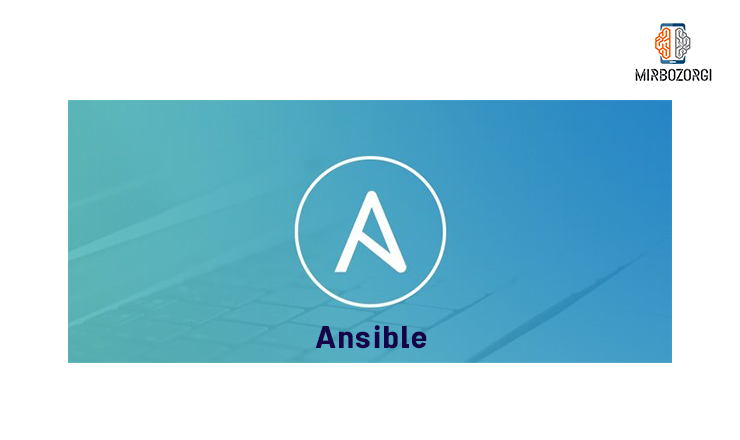 Networking: Ansible can also automate various networks thanks to its networking capabilities. IT operations and development teams are already using Ansible’s simple, powerful, and agentless framework. Rather than using the Ansible automation engine, it makes use of a data model (called a “playbook” or “role”) that simply spans various network hardware.

Hosts: Ansible hosts in the structure are nothing more than node systems that Ansible takes care of for you. It doesn’t matter if it’s a Windows, Linux, or RedHat machine.

Playbooks: Playbooks are YAML-formatted files that describe the Ansible tasks to be performed. There can be configurations declared in Playbooks, but they can also orchestrate the steps of any manually ordered process, even if it contains jump statements. They have the option of launching tasks simultaneously or not simultaneously.

CMDB: IT installations’ central repository and data warehouse are known as CMDB. Configuration items (CIs) are a common term for a group of IT assets, and this database contains information about those assets and the relationships between them.

Cloud: Data is stored, managed, and processed using the cloud, which is a network of remote servers hosted on the Internet. You can connect to your servers and launch resources and instances on the cloud.

Ansible is a very simple automation IT engine that automates configuration management, Application Deployment, in-service Orchestration and many other IT requirements. Given that it doesn’t use additional security infrastructure, it’s easy to install and Config. Most importantly, it uses a very simple language (YAML, for Ansible Playbooks). With it, you can define the automating steps in plain English. Mirbazorgi’s website aims to help you learn and fix your problems by providing articles and practical experiences. Email me if you have any questions.