Dependency Injection vs. Inversion of Control 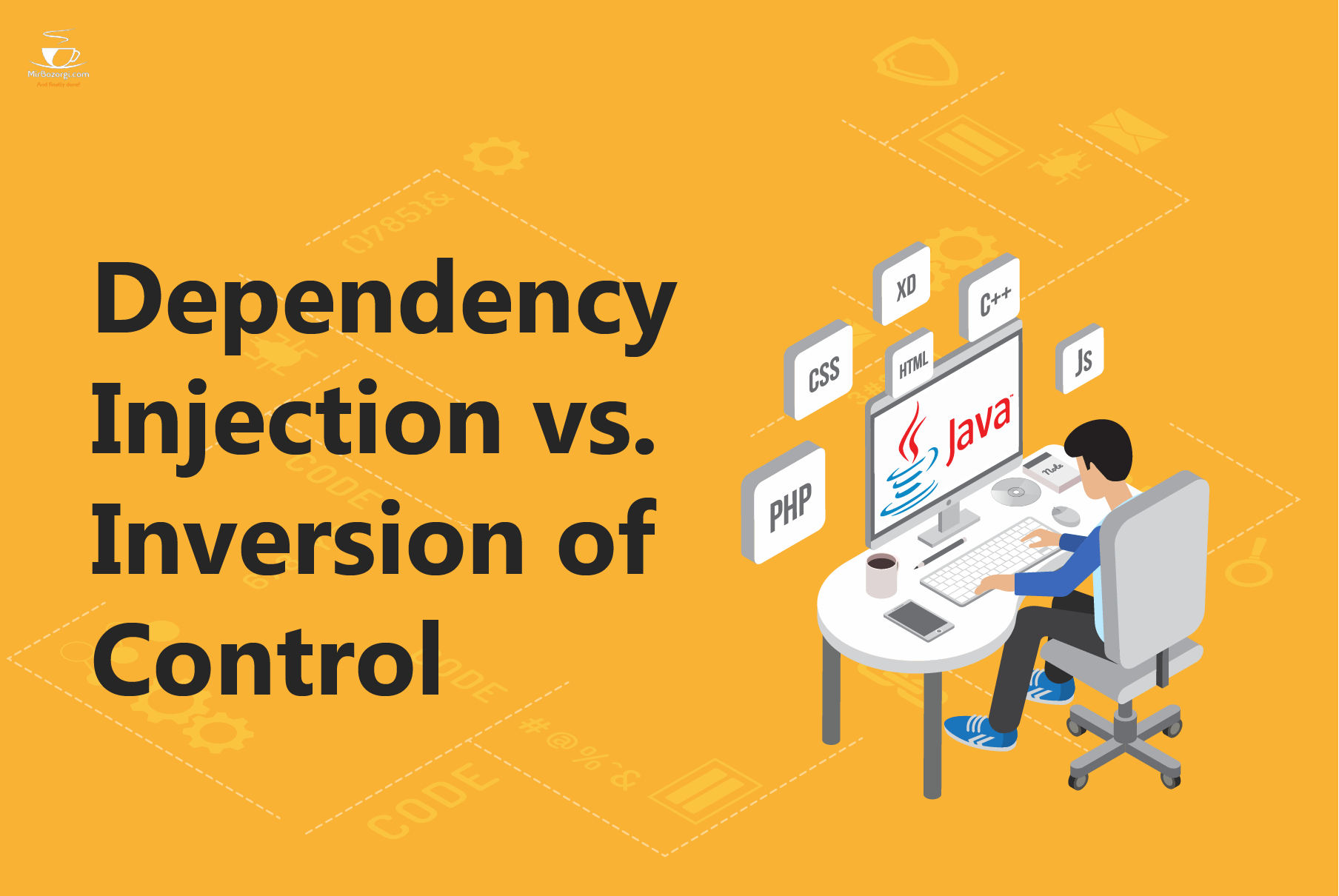 Dependency Injection vs. Inversion of Control

Inversion of control (IoC) is a programming method in which object coupling is bound at run time and is often not known at compile time using static analysis, according to the Wikipedia entry. The differences between IOC and dependency injection in spring are illustrated in this spring tutorial.

Definition of Inversion of Control: (IoC)

The business logic flow is determined by objects that are statically allocated to one another in traditional programming. Inversion of control relies on the assembler’s ability to create an object graph, which is made possible by abstractions defining object interactions. Inversion of control is performed using dependency injection, but some claim that a service locator can also be used.

As a design guideline, inversion of control fulfills the following functions:

If you want to have more control over your application’s most important components, IoC is the way to go. It is a pattern for creating instances of objects other objects rely on without knowing which class will be used to deliver that functionality at compile time. In order to activate the components that provide the specified functionality, IoC relies on dependency injection.

It is possible to write more flexible, reusable, and encapsulated code by combining the two approaches. It is because of this that object-oriented design relies heavily on these notions.

When and how do you use IoC?

Inversion of control can be achieved in numerous ways in object-oriented programming. To name a few:

The Spring Framework’s IoC container is built on the org. Spring framework. Beans and orgs. Spring framework. Context packages. Using the BeanFactory interface, developers have access to a powerful configuration tool that can handle objects of any kind. Additional functionality such as message resource handling (for use in internationalization), event propagation, and application-layer specific contexts such as the WebApplicationContext for usage in web applications is provided through the ApplicationContext interface. 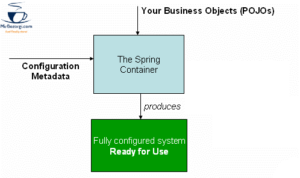 The BeanFactory interface has a variety of implementations. The XmlBeanFactory class is the most often used BeanFactory implementation. The XmlWebApplicationContext class is another popular one. An individual instance of a confined object (the Prototype design pattern) or a single shared instance might be returned by the bean definition (a better option to the Singleton design pattern, where the instance is a singleton within the factory’s scope). The bean factory configuration determines which sort of instance will be returned: the API is the same.

Let’s first look at how we are able to create a bean in the spring framework so that we can better comprehend what’s coming up next in the section on dependency injection types.

In Spring, how to make beans

A bean definition is like a recipe for making one or more actual items. By looking at a bean recipe by using the configuration metadata provided by that bean definition, an actual object can be created (or obtained).

How to use the constructor

All regular classes can be used and are compatible with Spring when generating a bean using the constructor approach. A new class doesn’t need to implement any interfaces or be coded in a specific way. You don’t need to mention the bean type. Configuration metadata using XML can be specified as follows:

Using a factory method with a static implementation

createInstance() is the factory method for a bean with the id “exampleBean.”

If this method returns a live object, Spring expects it to be treated as if it had been created via the constructor.

The factory method of a bean that exists from the container is requested to produce a new bean in a manner similar to instantiation via a static factory method.

Only constructor parameters, arguments to a factory method, or attributes set on an object instance after it’s been formed or returned from a factory method define an object’s dependencies in Dependency Injection (DI). The container must actually inject these dependencies when it produces the bean—the container. Thus, the name “Inversion of Control” was coined (IoC).

No-argument constructors or no-argument static factory methods can be used to instantiate your beans using setter methods, which are called after the bean has been instantiated.

By calling the constructor with several arguments, each of which represents one of the collaborators, Constructor-based DI can be achieved. As a result, the rest of this article will treat parameters to a static factory function and arguments to a constructor as almost interchangeable, even if they are not identical.

We use an interface from the IOC framework in this methodology. The object will be injected into the main class using the IOC framework’s interface function. When you require some logic that is not applicable to a place in a property, this way is much more suited. Logging support, for example.

What are the most common interview questions?

Component vs. service: What’s the difference, and why is it important?

A service, like a component, is used by third-party programs. Components for local use are the primary difference (think jar file, assembly, dll, or a source import). A service can be accessed remotely using a synchronous or asynchronous remote interface (e.g., web service, messaging system, RPC, or socket.)

In what ways does DI differ from the Service Locator pattern?

Dependency Injectors allow you to choose the best service implementation for your application’s environment and use cases. A service locator can also be used to break this reliance in addition to injection. If an application needs access to all of the services it might require, a service finder is a good starting point. Scan all of these services and store them in a singleton Registry, which is what it does next. It is possible to query the registry and retrieve the proper implementation when a service request is made.

Service locator versus dependency injection: which is the best choice?

The fundamental difference is that with a Service Locator, every service user depends on the locator, as I’ve already explained. It means that you must be familiar with the service locator’s input and output specifications. In this way, the choice of the pattern becomes more important than ever before.

Setter injection vs. constructor injection raises an interesting question about how to fill out fields in object-oriented software — should you use setters or constructors?

In a prominent place, constructors with parameters make explicit what it means to create a proper object. You should develop a variety of constructors if there is more than one way to do a task. The lack of a setter in the constructor lets you plainly hide any immutable fields, which is another benefit of using it. The absence of a setter, in my opinion, effectively signals that something should not change. When initialization is done via setters, this can be a real pain in the.

However, in languages lacking keyword parameters, having a large number of constructor parameters might make things look clumsy. It can be difficult to show this with numerous legitimate object constructors since the quantity and type of parameters in constructors can only change. If you have basic parameters like strings, constructors likewise suffer. Injecting setters allows you to label each one, letting the programmer know exactly the function of that particular set of code. Constructors rely solely on the location, which makes them more difficult to understand.

Setter injection may be a better option if the issues stated above become a problem, but I prefer to start with constructor injection.

What is Bean Factory?

To put it another way, it’s like a factory class for beans. The BeanFactory contains the definitions of many beans and subsequently instantiates the beans whenever customers request them.

While instantiating collaborating items, BeanFactory can construct associations between them. Neither been nor bean clients need to worry about setup anymore. BeanFactory calls custom initialization and destruction methods as part of the bean life cycle.

What Is the Context of the Application?

Although a bean factory is sufficient for simple applications, you may want to upgrade to Spring’s more powerful container, the application context, in order to take full advantage of the framework’s capabilities. An application context appears to be very similar to a bean factory. Bean definitions are loaded, beans are wired together, and beans are dispensed as needed by both. However, it also has the following advantages:

Support for internationalization as well as resolving text messages.

File resources can be loaded using this method.

Beans that have been registered as listeners will receive notifications of events.

Where can I find examples of the Application Context in action?

ApplicationContext can be implemented in three different ways:

Loading context definitions from an XML file in the classpath is treated as classpath resources by ClassPathXmlApplicationContext. The classpath of the program is used to load the application’s context.

Loads a context definition from an XML file that is stored in the filesystem. The code is used to fetch the application’s context from the file system.

7.8. Should BeanFactory or ApplicationContext be preferred?

All a BeanFactory does is create and set up new beans. As well as enabling several enterprise-specific capabilities like transactions and AOP, an ApplicationContext also acts in this capacity.

Simply said, an ApplicationContext should be used wherever possible.

This course clarified the differences between IOC and di, two terms commonly used in spring programming.