Implementation of cache in Hibernate

How is the cache implemented in Hibernate?

In this article, I’m going to familiarize you with the concept of Hibernate in Java and the use of cache in it. In previous java programmingcourses, you have become familiar with the basic concepts related to Java and now I will bring you newer concepts in this article. 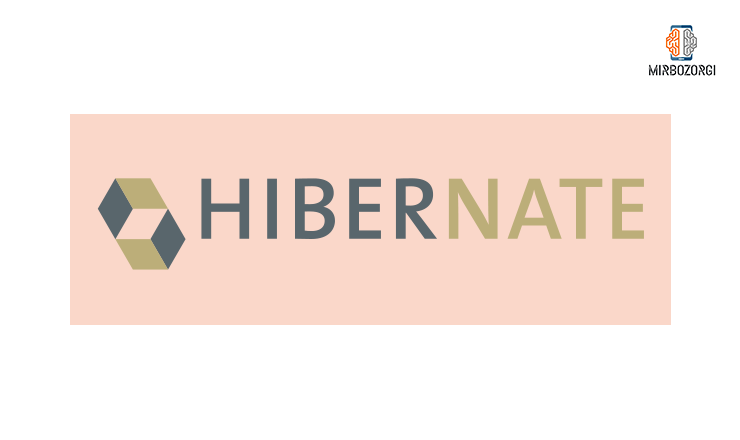 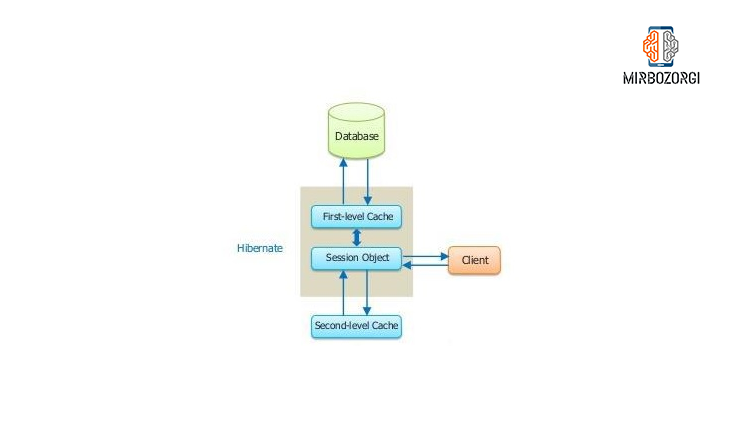 Cache is enabled at the first level, at the level of a session, and is used in all requests that are exchanged. This level of cache automatically processes all requests before being sent to the database and prevents duplicate transactions from exchanging with the database. The first-level Cache features can be summarized in the following cases:
In the figure below, you will see the steps to load an object. In this form, Hibernate first checks the availability of the requested object on the session after getting the request. If this object is available, the data will be refreshed from the session and returned. If the object is not available, the request will go to the database and the data will be extracted from the database. In this case, cache will also be built. 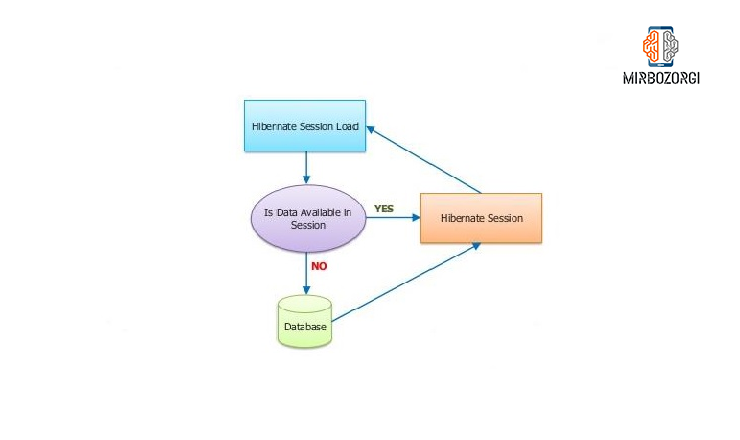 The cache in the second level depends on the Session Factory object and loads all objects at the Factory level when executing transactions. As a result, these objects are not limited to one user and will be available at all levels of the program. The cache features in the second level can be summarized in the following cases:
The loading steps with this cache are similar to the first level cache. The only difference is that if the data is not found at the Session level, the search will be performed at the more inclusive Session Factory level, and if the search in Session Factory does not result, the request will be sent to the database. 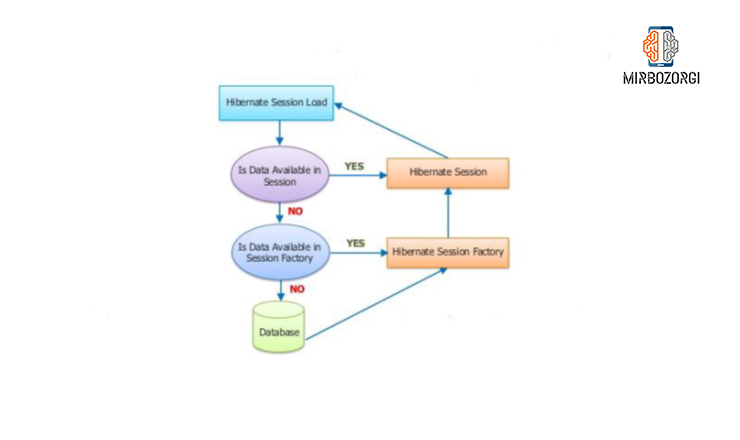 We want to review the implementation of the second level cache using EH Cache. In this program, we activate and use hibernate’s second level cache. After that, we add dependency called Hibernate -ehcache to the project pom. 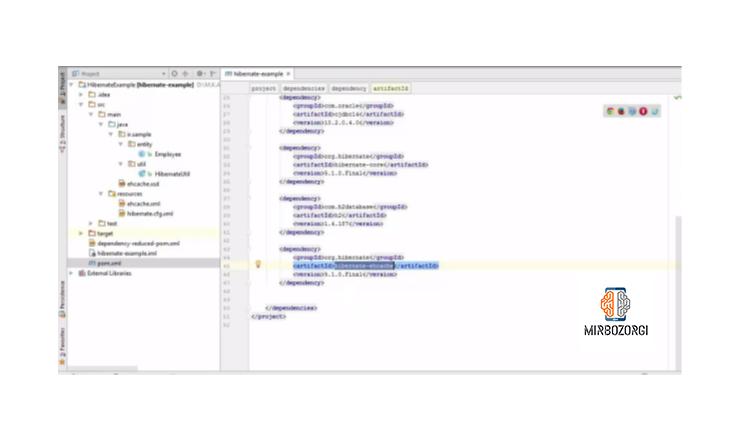 We also need to make changes to Hibernate settings. Assuming that the factory singleton is equal to the singleton EH Cache Reign Factory, we enable the second level cache and query cache, and the proprietary settings of EH Cache should also be introduced to Hibernate as a separate xml file. 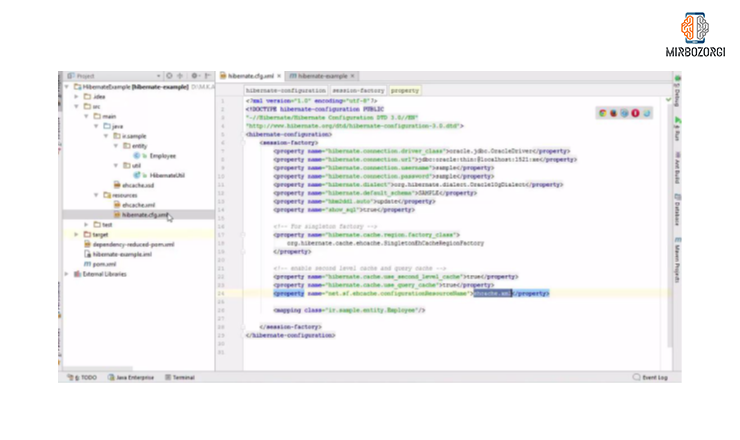 Now these must be determined in the Settings file (ehcache.xml).
In the persistence element, the cache strategy is determined against Local Temp Swap. Hibernate uses temporary memory and automatically empties as the program resets. 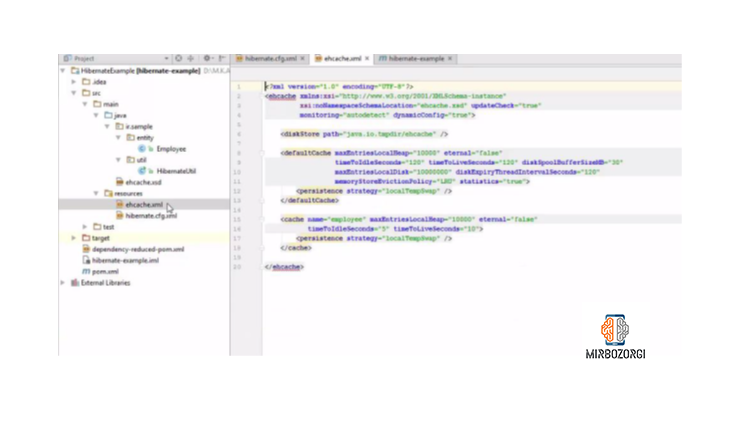 In each section on which the cache is to be applied, a @cache annotation is placed in which, in addition to announcing the cache strategy, a part of the settings file (ehcache.xml) is introduced to apply the settings. 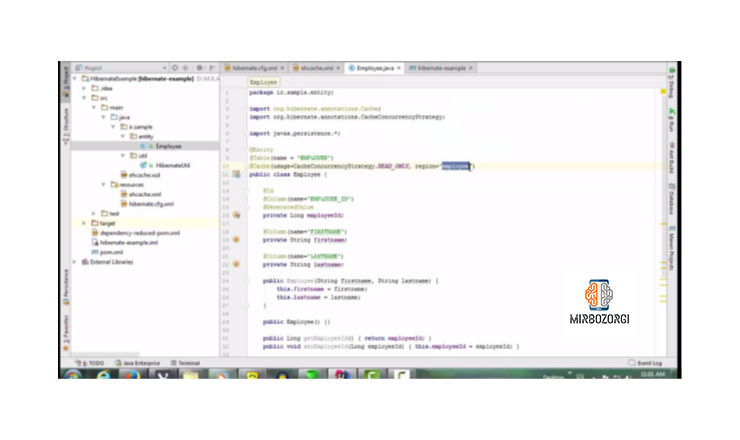 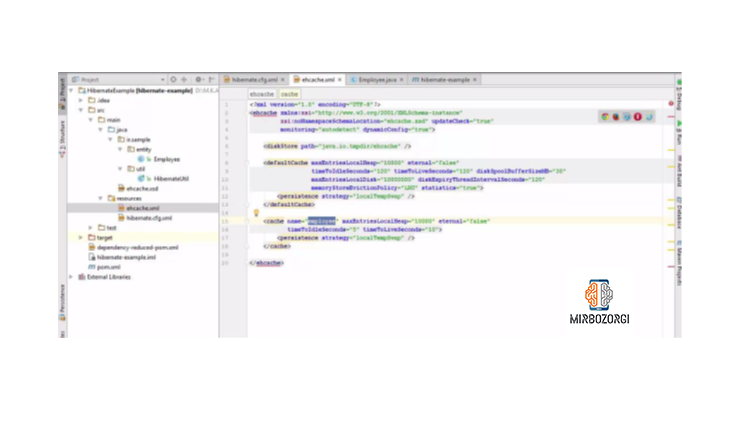 In this step, we will go to the implementation stages of the program. For this purpose, we load the code for two objects under different conditions, but simultaneously we open 2 separate sessions (session B, session A) on Session Factory. Session Factory has a method called get Statistics(). This method contains statistical information about all events that may occur on a Session Factory. 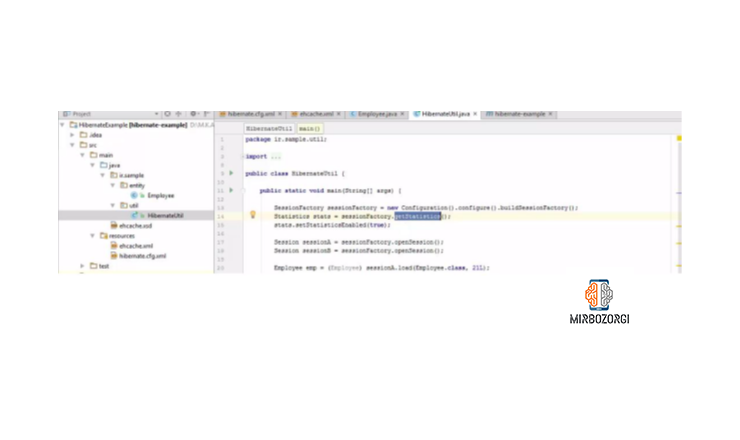 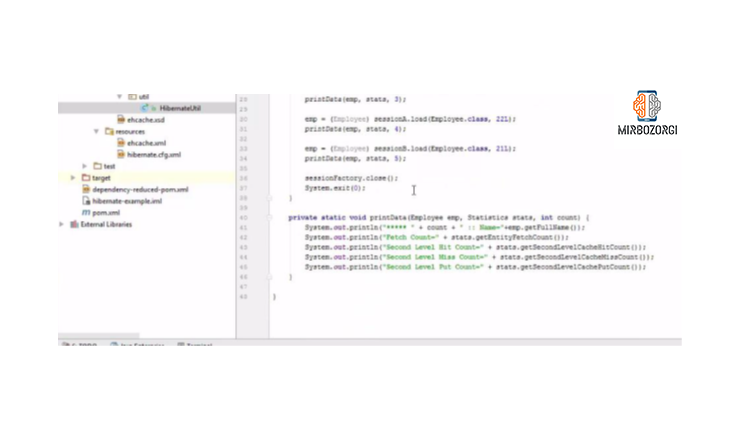 Another method called get Entity Fetch Count method is used here. This method refers to the number of times fetch requests are sent to the database. 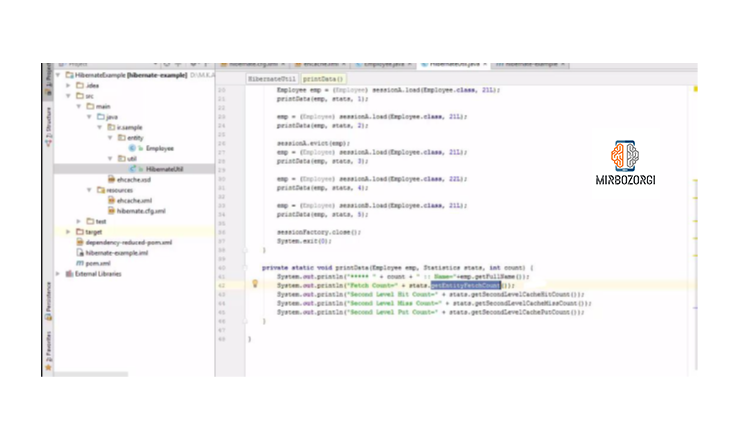 We check the process of running the program from the point specified by breakpoint. We load a record of the Employee table from session A. Then, with the method we have already written, we extract the record content and print the statistics about the cache. Printing query text on the console means extracting information directly from the bank. As in the statistical data, it is also visible that the request has been sent to the bank. The number of withdrawals from the cache or Hibernate is zero. Because before, such a record has not been included in the cache. The number of unsuccessful referrals to the cache is equal to 1 and the number of times it is stored in the cache is equal to 1. Because from this moment on, this record will be stored in the cache. 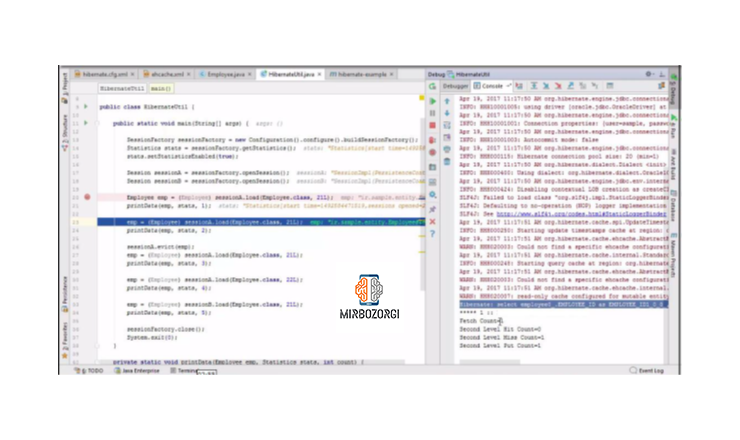 Secondly, we reload the same record as the first stage. The number of times you extract from the bank does not change because this record has already been loaded and is available in the cache. In fact, no operations are performed and there is no change in the parameters related to the cache. 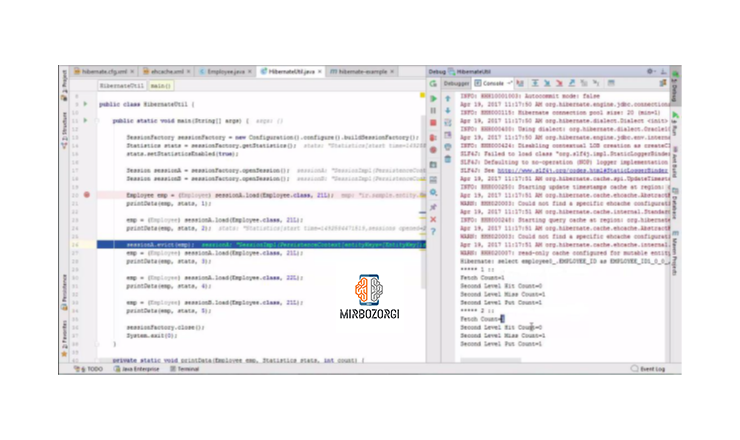 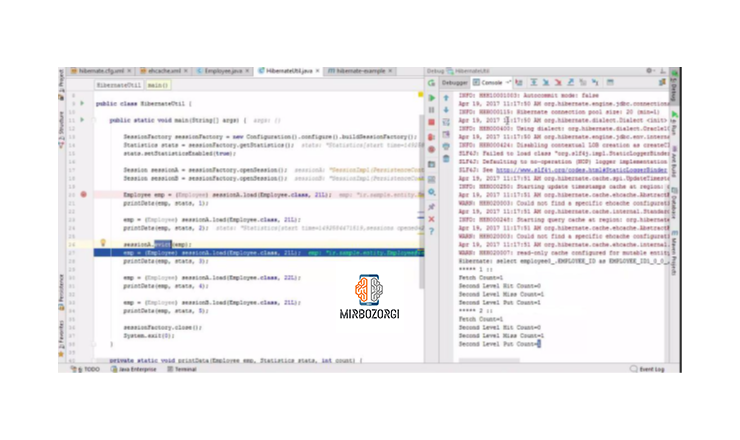 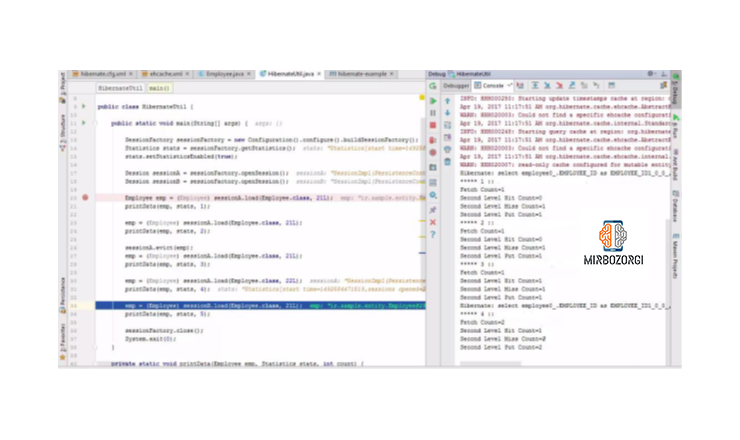 Finally, we load the same initial record this time in a new session. Due to the commonality of the cache at the session level, the request is not sent to the database and the record is removed from the cache. 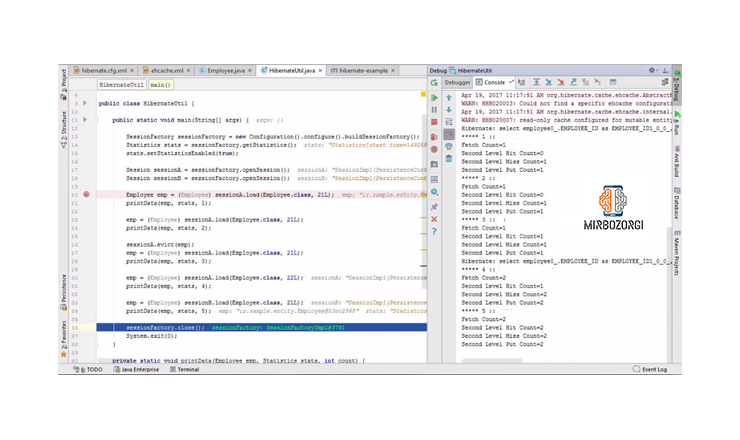 Therefore, the number of extractions from the cache has increased, but the number of unsuccessful referrals and the number of times it is saved does not change.
admin2021-10-15T15:14:03+03:30